Warsaw’s Museum of Modern Art – in its temporary location of a socmodernist furniture store – is, appropriately enough, hosting an exhibition by German designer Konstantin Gricic. The works on display do not come from the drawing boards of his Munich studio: Grcic here takes on the role of curator.

Like his Serpentine Gallery show in London in 2009, Grcic’s Warsaw exhibition is an exploration of the forms of the modern world. Gathering a diverse range of objects for a long corridor-like gallery, he has adopted Henry Ford’s famous prohibition – ‘Any colour … as long as its black’. Entitled ‘Black2’ (‘Black Squared’), Grcic seems to be interested in how a motif (like a ‘black-letter’) or a phrase (such as ‘black box’) becomes a thing.

Most of the exhibits are mass produced objects – books, ashtrays, plastic pallets and electric guitars. Exhibited without captions or any other kind of textual support, Grcic’s black objects seem to have no history. They are also stripped of the cables which might animate them with electricity (no glowing stand-by lights here) or the handles which could be grasped by users. The viewer enters into the world that Rilke, another occasional Bavarian with an interest in dinglichkeit, called ‘indifferent things’:

Even for our grandparents, a ‘House’, a ‘Well’, a familiar tower, their very dress, their cloak, was infinitely more, infinitely more intimate: almost everything a vessel in which they found and stored humanity. Now there come crowding over from America empty, indifferent things, pseudo-things, DUMMY-LIFE … The animated, experienced things that SHARE OUR LIVES are coming to an end can cannot be replaced.
Rilke in a letter to von Hulewicz, November 1925.

The point is to make us think less about the role that these products of industrial culture play in our lives and more about the black skins in which they are sheathed. The exhibition opens with a set of heavy tomes in a vitrine which discuss the Kaaba at Mecca, Malevich’s ‘Black Square’ (1915) and Kubrick’s Black Monolith in ‘2001AD: A Space Odyssey’ (1968). These are the eternal blacks of the deep cosmos. 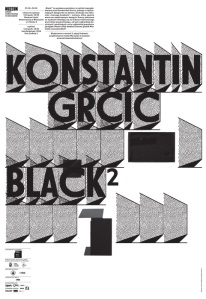 One could easily extend this monochromatic range: ‘Black dirties’ says Wittgenstein; ‘black is the death of colour by colour’ according to Briony Fer writing on Ewa Hesse; and the black tulip is the historic symbol of hubris .. But let’s not leave the exhibition too far behind. Grcic’s exhibits are rather more mundane. A pair of black boxing gloves rest close to a black Amex card in another vitrine to tell us something uncertain about power. A uncertain black object – probably an ashtray – sits on a shelf next to a copy of The Bible. Ashes to ashes, perhaps. Often funny and sometimes poignant, Grcic’s products seem to be a modest gathering of things in light of the deep reserves of meaning that can be dressed in black.