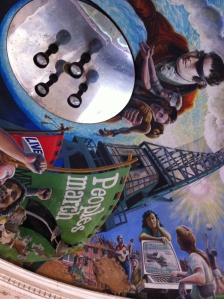 You can imagine the bemusement when the commission arrived. British artist Chris Evans – a participant in this year’s Liverpool Biennial – invited Boodles, the celebrated luxury jewelers in the city, to craft a piece of jewellery in response to the art festival’s press release. This is the latest in a series of works created by Evans over the last decade by commissioning others. Boodles set to work and the figurative title of the biennale’s exhibition theme, ‘A Needle Walks into a Haystack’, is now carried by a ring – a semi-precious stone wrapped in a twirling festoon of diamonds – on a large plaster plinth in the Old Blind School, one of the five venues which, together, accommodate the six shows which form the 8th Biennial Exhibition.

Like the proverbial needle (and the inscription that remains almost unseen on the inside of the ring) the theme itself is often difficult to find in the patchwork of venues, events and exhibits that form the biennial. This, however, comes as something of a relief. The curatorial concept – which might be summed up as a thread linking art which both reflects on but also disrupts everyday life – is forgotten easily enough in the main exhibition, let alone the other shows across the city, which include ‘Podwórka’ (Courtyard, 2009), a work by American film maker Sharon Lockhart at FACT (Foundation for Art and Creative Technology) recording how children living in the rundown Polish city of Łódż make their own worlds; a retrospective of the arts programmes made prolific Belgian TV director Jef Cornelis between 1964 and 1997 at St Andrews Gardens; and a lightweight survey of the late 19th century painter James McNeill Whistler at The Bluecoat. Other new commissions timed to coincide with the biennial are exempt too. These include a Mersey pilot cutter in a dry dock with a livery conceived by the venerable Venezuelan op-artist Carlos Cruz-Diez – titled a ‘Dazzle Ship’ to recall (not very convincingly) the role played by modern artists such as = in producing disorientating optical effects for the Royal Navy in the World War I.

At Tate Liverpool Mai Abu ElDahab, one of the two curators of the biennial, worked with Claude Parent, the nonagenarian French architect best known for his collaborations with theorist Paul Virilio in the 1960s. The pair developed the theory of the ‘fonction oblique’ (oblique function), calling for a renunciation of the perpendicular angle in architecture. Tilted floors and open expanses would revive the dynamism of the revolutionary avant-garde (think of El Lissitzky’s wedges) and promote non-conformist ways of walking, sitting and being. Architecture, they claimed, should shake people out of the passivity required of them by the consumer society.

Parent is both architect and curator at Tate Liverpool, filling its double-height Wolfson Gallery with steep timber ramps, temporary walls stretched with transparent fabric and a curving concave quarter pipe to form a rampscape for energetic encounters with artworks he has selected from the Tate’s collections. Walking up and down these steep inclines has, for instance, the effect of amplifying the flickering kineticism of Physichromie no. 123 (1964), another work by Cruz-Diez, much smaller and more convincing than the ‘Dazzle Ship’ outside. Parent’s architectural additions are engaging enough, affording a cocked version of what Le Corbusier called the ‘architecture promenade’ to Tate visitors. This might well fit the biennial theme but it is Parent’s curatorial eye that stimulates the imagination. He has selected a number of 20th century works that seem to be motivated by lunar exploration – sometimes literally, in the form of Gabo’s miniature model for a rotating Monument to the Astronauts (1966–8). Other works suggest imaginative journeys taken by the moonstruck, such as Paul Delvaux’s canvas Sleeping Venus (1944). This is a quiet, lyrical call for visionary culture.

Freed from the responsibility of carrying big ideas, many of the contemporary works in the Old Blind School have a twitchy, fretful quality. Artist Marc Bauer, according to the curators, abandoned his studio for a ‘dingy’ Liverpool hotel for a week. The result, a large charcoal drawing in which workers loom out of the darkness is claustrophobic. So is Judith Hopf and Henrik Olesen’s film, Türen (Doors, 2007) in which die Polizisten walk in and out of the rooms in a large apartment over and again, never enjoying the leisure for which they seem to be preparing.. Even a work that seems to take on momentous political and historical theme, Rana Hamadeh’s audio play Can You Pull in an Actor With a Fishhook or Tie Down His Tongue With a Rope? (2014), achieves its effects by being mounted in grotty office environment. A re-scripting of the Shiite ritual of Ashura, a form of public mourning in which thousands reenact the martyrdom of Husayn ibn Ali, a grandson of the Prophet Muhammad, the piece turns the experience of listening into an ordeal: heavily distorted sounds – delivered by large subwoofers set in the ceiling – seem to disarrange both words and listener.

Perhaps the anxious quality of the works in the biennial’s group show is amplified by its decrepit setting: the Old Blind School is a labyrinthine building that functioned as a trade union centre in the 1980s. It has all the seductive effects of the modern ruin, often overshadowing the art its houses. In a cupola, a crumbling mural celebrating the city’s labour history seems to have as much to say today as Evans and Boodles’ luxury trifle or Bauer’s obsessive drawings. With its images of the People’s March for Jobs in 1981 (a protest which consciously drew on the hunger marches to London in the 1930s), the mural is a reminder of the time when Liverpool was the most important site of resistance against Thatcher’s privatization policies. After the precipitous decline of traditional industries like ship building from the 1970s onwards, the city became a testing ground for all kinds of regeneration projects including, since 2004, the biennial.

Attempts to use culture to reverse post-industrial decline are, of course, often vexed and Sally Tallant, biennial director since 2012, is keen to distance the project in Liverpool from simple-minded equations about value and short-term thinking. It is, she says, a year-round opportunity to build an audience and a critical context. Practically, this means an on-going public programme of talks, performances and classes, sometimes in unexpected locations (in November last year artist Chris Evans persuaded biennial founder and art collector James Moores to open his home to the public for one such conversation). Moreover, Tallant has already declared a ‘Ten-year plan’ for Liverpool to escape the helter-skelter search for spectacle that has characterized the global biennial phenomenon. ‘Embedded, integrated research into architecture, urbanism and into artistic practice – this is what the biennial sits on. The work is not about Liverpool but it is located in Liverpool’, she says. ‘I think that artists – and writers, architects and others – have a role to play in how we express value in the world.’ This – as she freely admits – is a much bigger task than mounting a sixteen-week art festival.