This is an extract of an long essay on the work of photographer Nicolas Grospierre. It will appear in a book surveying his practice that will be published in 2013.

… Unlike painters or sculptors, architects do not work directly on their creations. They rely on drawing and occasionally model-making to act as a kind of intermediary between an idea and its realisation. One fantasy which accompanies much contemporary architecture today is that of folded or warped structures made from vast sheets of material. Folds and cuts give the enchanting illusion of immediacy and simplicity (despite the complex calculations and feats of engineering which are required to achieve these effects). 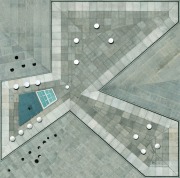 The Polish Aviation Museum in Cracow, designed in 2010 by the Berlin architect Justus Pysall with structural engineers Arup, illustrates this desire. The building looks like architectural origami, as if cut and folded from a single ‘paper’ sheet. By photographing all the museum’s surfaces (including the roof from a crane) and then recomposing them as a series of squares, Grospierre has taken this fantasy at face value. The resulting works form a series called ‘Paper Planes’ (2010). Lacking the telltale shadows of aerial photography, the mosaics of concrete and glass textures are emphatically flat. Like a looping fold, an imagined horizontal surface is transformed into the undulating form of the museum and then back to the original fantasy in photographic form. And in a playful gesture which points to another dream, namely that photography can escape its flat world, Grospierre folds these sheets into massive paper airplanes. 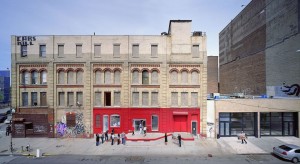 In ‘Self-Fulfilling Image’ (2009), a composite photograph, Grospierre explores another long-standing preoccupation of photographers, the mise-en-abyme. The viewer is presented with copies of an image within the same image. Walking along the sidewalk, Grospierre himself carries the photographic print into the scene. This is more than a self-portrait or a city scene. His double, a few yards on, presents the image to a woman, perhaps the curator of the New York gallery in which the image, in its third incarnation, appears. We peer through the window to witness the inauguration of the work now fixed on a wall. We are eyewitnesses to a ‘private view’. There is a playfulness in these spirals of time and place. And this deliberately naïve narrative is, as the title suggests, an exercise in wish fulfillment. The young artist makes a work which will attract the attention of a Chelsea gallery. (And, of course, the image was shown in the Cueto Project gallery, the site of Grospierre’s fantasy, in Manhattan in 2009.)

The term ‘en abyme’ originates with André Gide in the 1890s, but the practice of inscribing a story within a story or an image within an image is much older. In fact, the French novelist pointed to its historic place in art: ‘It pleases me to find, in a work of art, the very subject of the work transposed to the scale of its characters. Nothing illuminates the work better, or establishes its proportions more clearly. Thus, in some paintings by Memling or Quentin Metsys a small, somber convex mirror reflects the interior of the room in which the depicted scene is set. Also, Velásquez’s ‘Las Meninas’ (but in a slightly different way).’[1] In photography, the mise-en-abyme can take various forms including, of course, the use of mirror images. Mirrors produce recursive effects of duplication. And as Craig Owens once argued, the appeal of the mirror to the many photographers who sought out reflective surfaces was, in part, that it captured the condition of photography itself: ‘Because the mirror image doubles the subjects—which is exactly what the photograph itself does—it functions here as a reduced, internal image of the photograph. The mirror reflects not only the subjects depicted, but also the entire photograph itself. It tells us in a photograph what a photograph is—en abyme.’[2] And this, according to Owens writing more than thirty years ago, is what distinguishes the appearance of mirrors of photographs from their depiction in paintings or their use in novels.

Today Owens’ claim seems like an assertion from a different time. It is. Arguments about ‘what photography is’ were exhausted in the 1990s and few photographers or viewers are much troubled by questions of ontology now. Photography’s ‘natural’ realism—much like the point-of-view offered by the lens—are expressive resources to be exploited rather than defining techniques. Consider Grospierre’s ‘Mirror’ series (2008). Each photograph records a special kind of mirror which reflects the image of everything around except the person looking in it. Even standing directly before the bright, reflective surface, the viewer—or for that matter the camera—will not appear. Here the vanishing point takes on a literal form. Questions of technique or the condition of the medium are redundant: what counts now is the outline of a fantastic idea. In fact, Grospierre combines these images with a Borgesian story about the development of a secret design by Polish scientists in the Second World War to fight the forces occupying the country. Like an archaeologist of modernity, Grospierre ‘discovers’ these mirrors in Warsaw’s Philharmonia and Palace of Culture.

The mirror is by no means the only application of the mise-en-abyme in photography. In the 1970s, American photographer Duane Michals produced a number of series of photographs which seemed to allude to the capacity of the lens to zoom into or pull back from an image. In the grid of nine images which make up ‘Things Are Queer’ (1973), the opening image of a bathroom is revealed to be an illustration in a book which, in turn, is held in the hand of a mysterious shadow of a man who, we come to understand by the fourth image, has been captured in a photograph. This portrait appears framed, seemingly hanging in the bathroom which appeared in the first image. Organized according to a chiastic principle in which the first and the last image are identical, Michals’ series suggests an eternal circle; a photograph in a photograph in a photograph and so on. The abyss—Gide’s term—is indefinite multiplication (and a property of mechanical image-making which has not been lost in the digital age). Any attempt to identify an initial image in this gyre seems impossible.

Grospierre’s ‘Self-Fulfilling Image’ shares Michals’ interest in the impossibility of distinguishing the difference between looking at a photograph of someone or something and a photograph of a photograph of the same subject. Even without the serial structure of Michals’ ‘Things Are Queer’, the viewer completes the circular motion when she or he finds the ‘Self-Fulfilling Image’ in the ‘Self-Fulfilling Image’. Yet Grospierre interrupts this particularly reeling form of the mise-en-abyme with another one, namely that produced by the lines of projection which emanate to and from a mirror. Set in the centre of the image is a reflection of a figure in the window. Recognisable as Grospierre himself, he can be viewed, just, in the vanishing point formed by the lines of perspective produced by the buildings and sidewalk. Emphasising single-point perspective in this way, Grospierre’s photograph echoes the orderly compositions created by artists in the Renaissance. It is not Florence but Manhattan—the city island laid out on a grid at the beginning of the nineteenth century and populated with austere skyscrapers in the twentieth—which provides this organising geometry. As architect Rem Koolhaas remarked in his 1978 book Delirious New York,the grid’s two-dimensional discipline creates undreamt of freedom for wheeling three-dimensional fantasies.[3]

Speaking about the modern novel, Roland Barthes offered a number of reflections on the device of the mise-en-abyme.[4] He claimed that there is an ‘instability, an unstable slippage’ between the maquette, the preliminary model or sketch, and the mise-en-abyme. The story within the story is often presented as a kind of prototype of that which the reader holds in his or her hands. In Gide’s The Counterfeiters (Les Faux Monnayeurs, 1925), for instance, one of the characters, oncle Edouard, is writing a novel called The Counterfeiters,and two years later Gide published The Journal of the Counterfeiters, a notebook containing Edouard’s theory of the novel as well as newspaper cuttings and clippings that will be used to write the novel. Gide’s ‘maquette’, as Barthes calls it, antedates the novel it intends. A retroactive prototype, it seems to challenge orderly conceptions of progress. Philosopher Michel Serres would surely lend his backing: ‘We conceive of time as an irreversible line, whether interrupted or continuous, of acquisitions and inventions,’ he once observed. ‘We go from generalizations to discoveries, leaving behind us a trail of errors finally corrected—like a cloud of ink from a squid. “Whew! We’ve finally arrived at the truth …” But, irresistibly, I cannot help thinking that this idea is the equivalent of those ancient diagrams we laugh at today, which place the Earth at the center of everything, or our galaxy at the middle of the universe, to satisfy our narcissism.”[5]

Grospierre seems to share an enthusiasm for these twists of time and space. In 2008 he created a series of photographs which seem to document scientific instruments. Awkwardly tilted by axonometry, Grospierre supplies these devices with a fantastic provenance. ‘These are unique prototypes,’ he writes, ‘kept in the cellars of the Institute of High Pressure Physics of the Polish Academy of Sciences, to which I was granted access by Professor Sylwester Porowski, head of that Institute.’[6] Never put into service because they were dysfunctional, according to Porowski, they remain ‘prototypes’, presumably for some future instrument. In some alternate version of history, perhaps they even function. Other would-be objects are supplied with even more fantastic pedigrees. Grospierre’s ‘K-Pool I Spółka’ (K-Pool and Company) is a rendering of an open-air swimming pool in Brooklyn, New York. It was built in the late 1950s according to a design by Morris Lapidus (an architect best known for his Miami hotels). Yet the intellectual origins of this project lie not in Lapidus’ studio but in Koolhaas’ Delirious New York. The Dutch architect’s book concludes with a fantastic tale of Constructivist architects fleeing Stalin’s Soviet Union in a floating swimming pool, ‘a long rectangle of metal sheets bolted onto a steel frame’. They slowly propel their pool across the Atlantic by swimming synchronized laps from end to end. When, four decades later, they finally arrive, their enthusiasm for America evaporates. Manhattan seems to look like the Soviet Union they had left behind: ‘Had communism reached America while they were crossing the Atlantic? they wondered in horror. This was exactly what they had swum all this time to avoid, this crudeness, lack of individuality, which did not even disappear when all the businessmen stepped out of their Brooks Brothers suits.’[7] Grospierre’s axonometric image of the pool appears in the company of conventional photographic studies of splendid socmodernist buildings that were actually built in the Soviet Union in the 1960s and 1970s, as if to remind the swimmers of what they had missed whilst chasing their American dreams.

Koolhaas’ dreamwork, Delirious New York,presented itself as a ‘retroactive manifesto’, that is a theory of urbanism written after—rather than before—the new world it describes had been fashioned. It is a maquette for Manhattanism, ‘a programme—to exist in a world totally fabricated by man, i.e., to live inside fantasy’ which had already been built. Whilst Grospierre makes no claim on a programme, his photographic images—curling space, folding time and sometimes stirred with fiction—offer opportunities to find the fantastic in the familiar …